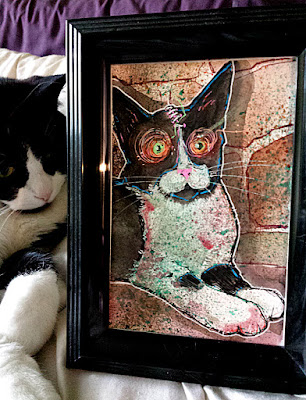 This is Felix the Zombie Cat, with his real life 'cat imitating art' cat ... Felix. Felix was a very timid scaredy cat, who would quite literally jump at his own shadow. You would think that in the apocalypse, after he's turned in to a zombie cat ... that his fear would disappear.
And if you thought that, you would be wrong.

He's still timid and easily startled, but he's also a zombie cat, which means as soon as he recovers from being startled you're dead. It gives you a small head start but Felix is also fast. You've been warned.
No comments: